Everyone with or without (health)care needs desires to live at home in their own environment for as long as possible. However, if the need for (health)care increases, the situation may arise that moving to a suitable, comfortable residence with 24-hour care is a good choice for the resident, family and (informal) healthcare provider. “Hofje Wendakker” opened in Heerde in the summer of 2019. Hofje Wendakker is a residential care complex with 96 apartments for people with severe healthcare needs such as dementia and somatic disorders. The courtyard has been completely integrated in the residential environment of this district in Heerde

In Heerde, the demand for suitable forms of housing for people with a severe need for (health)care is high. Driven by an aging population and an increasingly higher life expectancy, this demand is forecasted to increase sharply in the coming decades. An example is the expected development of people with dementia. As people age, the likelihood of dementia increases. In 2020, over 400 people in the municipality of Heerde have been diagnosed with dementia. As a result of the aging population, the number of people with dementia in Heerde will almost double in 2040 to 865. The development in Heerde is representative of other municipalities in the Netherlands. Particularly in the later stages of dementia, suitable forms of housing with 24-hour (health)care are necessary.

The increasing demand was the starting signal for healthcare provider Viattence, investor Apollo Healthcare Property Fund, architect Van Veen and construction company BAM VitaalZorgvast to jointly develop a residential care complex in Heerde to replace an outdated nursing home. All parties involved have extensive knowledge and proven experience in design, development and realization of (health)care housing. The biggest challenge was to create a residential care complex that ensures the availability of healthcare housing in response to the changed and changing demand for housing for people with a severe (health)care need. 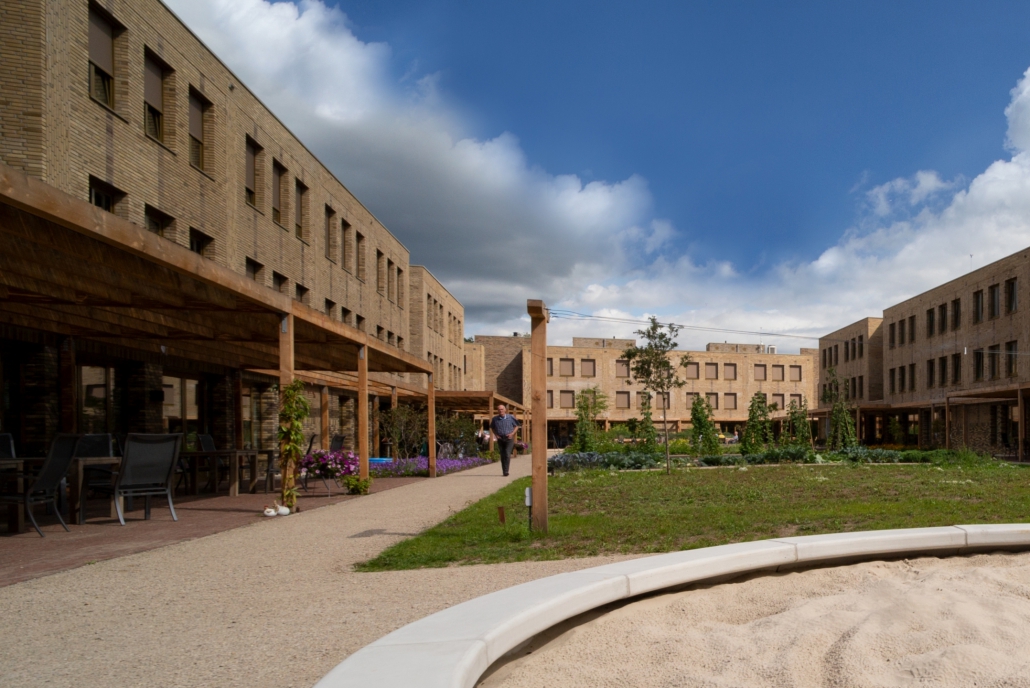 A vision document was established, based on the wishes and needs of residents, family members and (health)care workers. This vision (“Just like home”) provided guidance during the design and development of the property.
The goal of Hofje Wenakker is to let residents live comfortably, give relatives and caregivers a warm welcome and provide a pleasant workplace for (informal) healthcare providers. Hofje Wendakker consists of three separate buildings around a beautiful courtyard. The housing concept consists of twelve residential groups, each with eight residents. Each residential group has a spacious living room and open kitchen on the ground floor, where fresh food is cooked by residents and the healthcare workers. The living room is adjacent to the courtyard and invites residents to go outside. The garden is aimed at stimulating the senses and residents can also grow vegetables in the garden. The bedrooms are on the floors. There is smart lighting in the complex to support the day and night rhythm.

Click to get a full impression of the nursing home Hofje Wendakker.

Healthcare provider Viattence is very pleased with the new location. Laurent de Vries of the Executive Board of Viattence: “Hofje Wendakker is an integral part of a residential area in Heerde. The residents are therefore really part of the neighborhood. Hofje Wendakker is connected in a beautiful and innovative way with the society in Heerde. A fantastic place for residents and healthcare workers.”

“It is great that the care provider focuses on the residents and not the disease. That gave me the opportunity to create a atmosphere of living at home. Each group house has its own appearance. One group, for example, has a more county side appearance, another group is more classic, and the next exudes the atmosphere of the 1950s ”, says architect Evelien van Veen.